I came home one day to have my daughter (7 years-old at the time) ask me if she could tape together a whole bunch of sheets of paper to make a really big piece of paper.

"So I can make the world's biggest snowflake!" she said gleefully.

We meticulously taped together a big rectangle in a squarish shape. "Should we add one more row or one more column to make it most square-like?" I asked.

"We could measure it," she offered. We took a tape measure and found it was very close to a square already. My oldest daughter came to watch and we had a discussion about A4 paper and if we were close to size A0 (our paper was bigger than A0). "Is there a size A-negative-one?" she asked.

Next we folded our giant almost-square it in half, then we folded that into thirds in a wedge shape. We needed as close to a 60° angle as possible, so we had to measure the angle as well. Then she halved the wedges again and drew a design that she allowed me to cut out.

Opening the snowflake took time. We hadn't taped the complete edges, just a couple of spots on each edge, so pieces of the cut snowflake separated as we opened it. With each unfolding we had to use extra tape to reconnect edges.

Finally we opened it all the way. The "world's largest" snowflake! 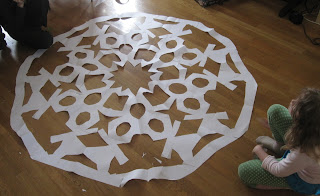 Unfortunately, we didn't have the world's largest window, so it lived on the floor of our living room for a week. The kids danced on it, stepping only in the openings, and played other games. Finally it was time for our snowflake to head to recycling.

It was a beautiful math project, conceived of and driven by a talented and determined 7 year-old girl.
Posted by Mike Naylor at 12:48 AM