I spotted these dice in a hobby shop and couldn't resist. Seven sides! 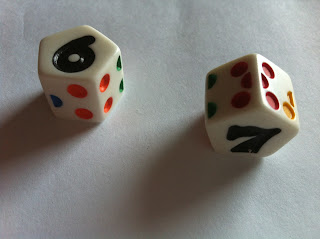 These bring many questions to mind. First and foremost: are they fair? How can it be determined?

Trying to calculate by shape, angles or area would be insanely complicated. This could be resolved by experiment, though, by throwing them a large number of times... Activity 1: determine if the dice are fair.

Here's a thought experiment. These are pentagonal prisms, two pentagon faces with connecting rectangles. If the rectangles had very small thickness, the dice would be like coins and only land on one of the two pentagon faces. If the rectangles were very long, they'd be like pencils, and only roll one of the five rectangle faces. There must be a point somewhere in between where the probability of a rectangle or a pentagon are the same! Did the makers of these dice find that point?

Here's another thought: does the chance depend on the area of faces? Do equal areas = equal probabilities? Activity 2: devise a thought experiment/extreme case to disprove this.

Notice that these dice have dot patterns split across the edges because an edge will be up. Clever design! The dots are colored to help distinguish them from the other "faces". Clever again! The pentagons have digits printed on them instead of dots patterns. Oh. Too bad. Was this a design choice to emphasize the "seven-ness" of the dice? I think dot patterns would look nice. Activity 4: Design dot patterns for all of the faces. (What dot patterns look good on pentagon faces? If not 6 and 7, then redesign all of the dot patterns so that each roll looks good).
Posted by Mike Naylor at 1:21 PM 3 comments:

At the end of September every year Norway celebrate scientific research with a slew of national events. Here in Trondheim we have two days of a 'Research Fair' where folks from education and industry set up stands inside two huge tents in the middle of downtown. Friday we welcome schools and Saturday we're open for the public. This year's theme was "Society". The Math Center (my workplace) teams up with the Math Institute every year, and this year our team met several times to create building materials so kids could make polyhedra and learn about how polyhedra contribute to art, arcitecture and science.

We glued magnetic balls to the ends of 50 cm long sticks, and they worked remarkably well as building materials. We decorated our stand with posters showing polyhedra in art, architecture, science and everyday living, and we also constructed a newspaper geodesic dome that we placed on top of our stand (see earlier post for instructions). We had three tables and a carpeted area for building. For two days we built stuff with kids and it was fantastic fun. 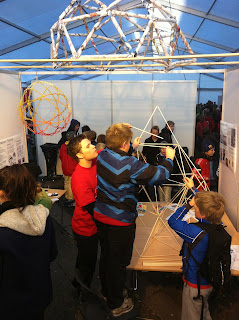 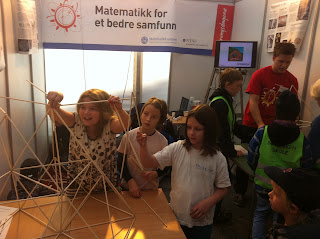 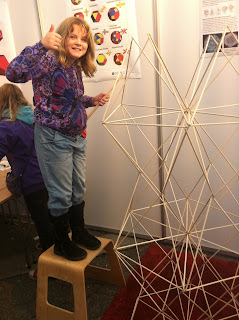 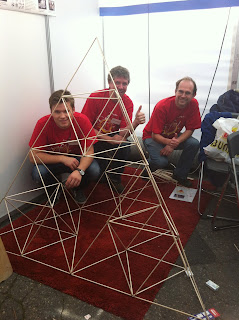 We found three different designs for towers. Height was limited by the strength of the magnets, but we were able to build two of the designs to heights over 2 meters. Amongst the Archimedian solids we built: tetrahedra, octahedra, icosahedra, and a truncated tetrahedra (I thought it would be impossible, but we did it), as well as several cube variants though they required different structural supports because of the unstable nature of squares.

Here's some pics of the construction process. We bought flowers sticks from a craft shop and Bucky Balls, strong magnetic balls that are awesome to play with by themselves. With a glue gun, put a small dab on the end of a stick, press a ball into it, and after it has cooled place a small amount of glue on the seam and then rotate the stick while smearing the glue around the seam with the tip of the glue gun. The glue should reach up the the midpoint of the sphere or a little higher. If done properly (it takes practice!) there is only a small amount of glue but the magnet is fastened strongly to the stick.

To be determined by further research: is it better to have the poles parallel or perpendicular to the stick? My feeling is that perpendicular will make for a better building experience. The first picture below shows the magnet being attached parallel to the stick. This gives less opportunities for sticking to other magnets, though the attraction will be stronger when it does align. I am unlikely to build another set so I may not know, but should you wish to make a set, you might want to try both and let us know! 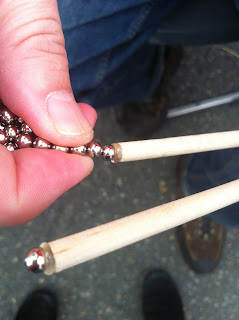 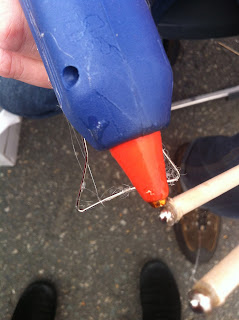 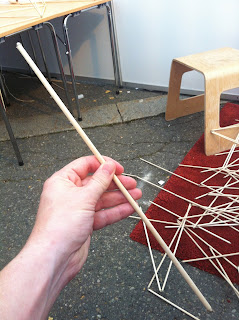 Posted by Mike Naylor at 4:07 AM No comments: