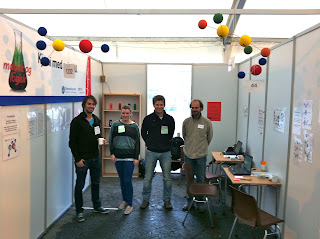 It's Forskningsdagene, or Research Days, in Norway. Many big cities have special events to celebrate science research. In Trondheim there are series of shows and lectures and the Research "Torg" (market/square/court?) Every year, the math center participates in the torg, and for the past few years I've been in charge of planning and coordinating the event with the university's math department.

The theme for this year was chemistry, so we decided to 'number chemistry'. I've always thought of the integers like molecules, with prime numbers as the atoms. We set up number molecule decorations, a prime number target game, and computers where visitors could find the prime factorizations of their phone numbers.

Students for the math department made the decorations and the ball toss game and did a very nice job. I wrote the program to find the factorizations, and we all made a variety of signs talking about primes, twin primes, the GIMPS project, and some prime number periodic tables that are pretty cool.

The game was a big success. Kids waiting in line were given a card with a number on it, maybe 18 or 54 or 770. The would need to figure out the prime factors by the time they got to the front. They would then throw balls at targets painted with primes, the goal being to knock down primes whose product matched the target number. Winners wrote their names on a sticky note and stuck it on the wall, enough of reward to make players proud without having to hand out candy.

Here's my periodic table of prime numbers, made to match the chemistry theme of the day and drive home the idea of "primes as atoms". Twin primes are colored gray, with symbols added for Mersenne primes, Sophie Germaine primes, Fermat primes, and palindrome primes. I think it came out nice! 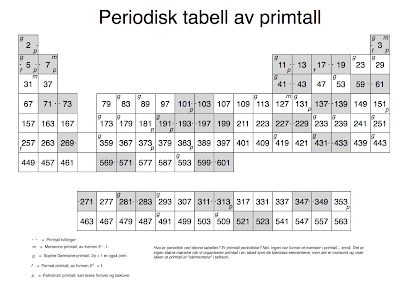 I went through many iterations of the table. I harbored an unfounded hope that maybe by organizing the integers in a different form maybe some kind of cool pattern would pop out. Here's the periodic table shape with integers starting at 1 and all of the prime numbers colored blue. It turns out that even in the periodic table format, the primes appear to be patternless. I don't know whether to be happy or sad. 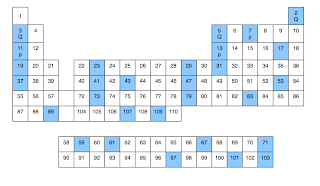