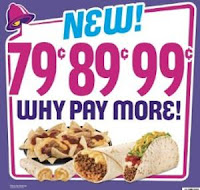 
"WHY PAY MORE!"... not, "Why pay more?" but with an exclamation point. How does the "Why" fit in with that punctuation? The only way to have it make sense and keep the exclamation point is to add a comma:

"Why, pay more!" Do they want us to think we're paying more?
Posted by Mike Naylor at 1:10 AM No comments:

I learned the sequence as "The Sucker Mate". I actually won a game in a chess tournament with this mate. It was 9th grade at West Junior High School, my first chess tournament, taking place on a Saturday morning. An opposing team had come from another junior high school, and they were superior. I lost my first two games. My next opponent proposed a switch. One of their friends had come along who wasn't officially on the roster. I agreed to allow my opponent to have this other guy take his place.

Egged on by his friends, this guy came on cool and cocky. He played swiftly. He played confidently. The game was over in 20 seconds. You can imagine what the other team thought. We were all dumbstruck -- this is one of the first 'tricks' you learn when you're in a chess club.

Our school got crushed. That game was the only game I won that day, but it was more than enough. Yes it was. 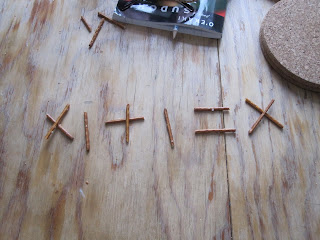 What's the fewest number of pretzel sticks you need to move to make this equation true?
Posted by Mike Naylor at 5:00 AM 1 comment:

This started as a challenge to see how many of my pieces I could get in the bar. I managed to not only get all of them hit, but to block all of the spots in the computer's home. Trailing by 289 points with 13 of his pieces off the board, I doubled. Computer ceded. Sweet. And a little disappointing... it thought I would win at this point, would I have? It would have been fun to try to roll my prime all the way home (advance my block of six one step at a time). 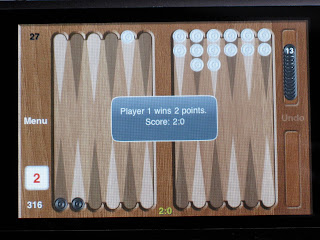 Posted by Mike Naylor at 4:58 AM No comments: