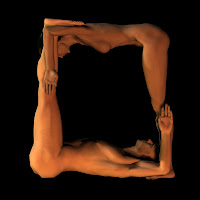 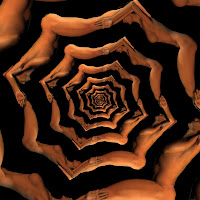 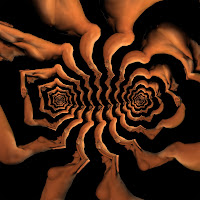 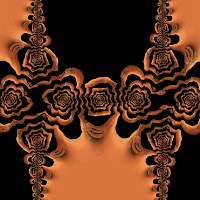 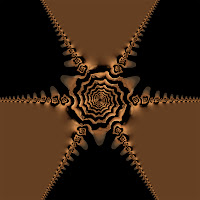 (This series later turned into the "Melt into You" series of prints, first shown at Bridges Pécs, Hungary in 2010. The third print was dropped from the series to meet space requirements... 4 square images fit better than 5.)
Posted by Mike Naylor at 12:02 AM No comments:

Mathmap is a program that lets you manipulate images with formulas. After battling the learning curve (software, xtools, plugins, filters, settings, faulty transparency handling in mathmap cocoa) I finally got some nice results. Here's the cover image from Naked Geometry, done with a Droste effect. 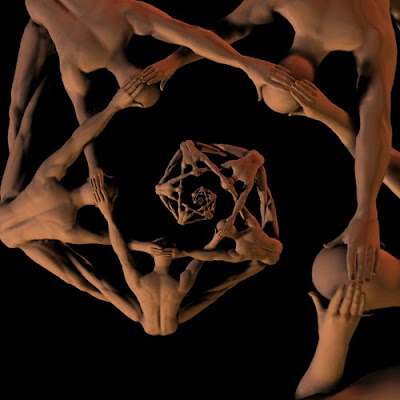 Posted by Mike Naylor at 3:42 AM No comments: 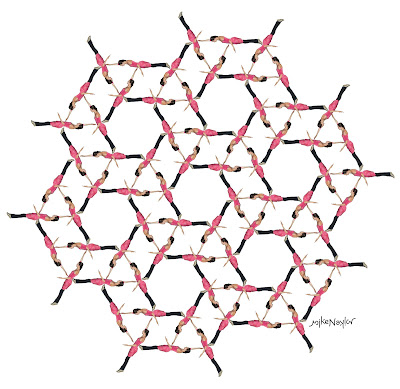 This is called a 6.3.3.3.3 tessellation. Thanks to Vi Hart for her fine modeling!
Posted by Mike Naylor at 1:49 AM No comments: 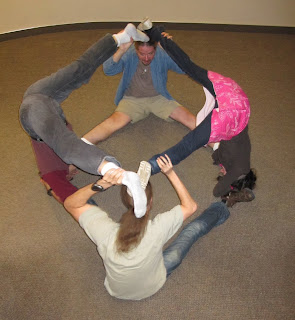 We got together for some live "Naked Geometry" at the Bridges 2009 conference in Banff. Pictured here are Mike Naylor, Karl Schaffer, Vi Hart, Erik Demaine, Eva Knoll, and Bob Bosch. 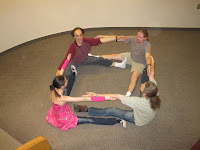 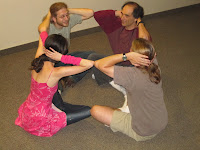 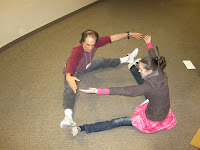 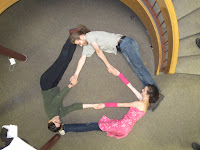 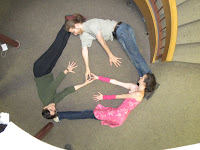 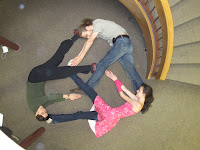 Posted by Mike Naylor at 4:08 AM No comments:

This story comes in 3 acts.

As a graduation gift, my father took me on a 10-day tour of Japan. I'd be starting as a new professor at WWU in the fall, and I had with me a sweatshirt and T-shirt with the WWU logo on them.

One morning in Hakone I wore the sweatshirt on a cruise across a lake in a giant crater. Once ashore, I was noticed by a group of American girls. They were on a high school trip from Bellingham, and excited to see someone from the same town.

Neat! What are the chances of being in Japan and meeting someone from the same town back in America? I wondered idly. I didn't give it any further thought until a few days later in Osaka when I wore my other WWU shirt I'd brought along. My father and I left our hotel room and got on the elevator at the 17th floor. Remembering what had happened last time I wore such a shirt, I wondered again what the odds were that I'd meet someone from Bellingham today. This time, though, I wanted an actual estimate, so I asked my father for the world population. 6 billion he tells me. I began to do rough calculations, people that have lived in Bellingham at some point, 1 million. Those who may be travelling to Japan at this point, 1% or 10,000. Number of people I'd see today...

As I was calculating, the elevator stopped on the 13th floor. An American couple walked in. The man pointed to my T-shirt, "Western Washington? No way! I'm class of '86, she's class of '89."

Now, what are the odds of meeting someone from Bellingham that day in Osaka at the exact same time I was trying to calculate the odds of such a thing happening?

In 2004 we'd just bought our second house and moved to Ferndale. I was teaching a history class, and on that day I was collecting drafts of papers from students. They turn in multiple copies of their drafts, one copy for me and others for peer review. I shuffled a stack of papers and began handing them back to students. "What are the odds that noone will get their own paper back?" I ask as I hand out the first paper.

I stick the paper into the middle of the stack and give him another. "What's the odds of it happening twice?" I ask, handing out the next paper.

"This is mine," the second student says. There are gasps of amusement and amazement around the room, myself included.

"What are the odds everyone gets their own?" I ask.

The third student does not get her own paper, and neither does anyone else in the class. It occurred to me later that once again the events for which I was attempting to calculate the odds, happened, as I was calculating.

That afternoon my wife and I were out for Dairy Queen. I told her of what had happened that morning and related it to the elevator in Japan. "Maybe I have a power," I told her, "that when I'm calculating the probability of something happening, it happens."

I thought maybe we should test it. I suggested calculating the probability that we'll know the next person who walks through the door. We discussed the probability a bit, decided it would be low as we'd just moved to Ferndale and knew almost no one. But, the DQ is near the interstate, so...

I began my calculations. Population of Ferndale, mix of visitors to DQ, number of people we know...

The door opened. In walked Bob Stull, our real estate agent who sold our last house and helped us with this one. It was a very weird moment.

On the way home, we stoppped by the grocery store and I filled out a lottery ticket. While filling it out, I calculated the odds of winning.

It didn't work. I don't think that should stop me from trying again ...
Posted by Mike Naylor at 4:12 PM No comments:

At the time I began learning the number memorization system I was working at a gas station. I started practicing the number memorizing system using peoples credit cards. My goal was to be able to memorize their card number in the time it took me to swipe their card. It was hard, but great practice. An easier task was memorizing pi. More digits, yes, but unlimited time to study and create a crazy story. The story I concocted began "A tree has tails hanging from it, the tails fall into my frying pan, which is illegal and my frying pan gets sent to jail. The jail is put into a big envelope and sent in the mail. I open the mail but thousands of vipers come out..."

It was super easy to get to 50 digits. So I did 100, ending it with the waiter walking in with a tray of 100 copper coins (copper = 74). It took one evening to make the story in my head, and I know it to this day, even without having recited it for a couple of years it's easy to recall.

I kept going. I went to 200. And then I realized there was a problem. I needed a stopping point, or I'd end up memorizing thousands of digits and losing all of my friends. What stopping point, though? 200? 500? 1000? They all seemed so... normal.

314 digits seemed like the perfect amount. A good size chunk of digits, a respectable amount without being "crazy", and a very cool number connected to pi. I had my goal. I remember sitting through a 2-hour graduation ceremony in Florida with a business card sized printout of 500 digits, working my way through the late 200s. A fun story with zombies and giant pools of jello.

Slowly, the horror dawned upon me. I realized I would never be able to forget the 315th digit of pi. That meant I had not memorized just the first 314 digits of pi. I had memorized 315 digits. And there was no going back, ever.

Eventually I stopped at 555, but I'm still not satisfied. You see, In the late 700s there's an interesting block of 999999, kind of like the Grand Canyon of pi. That would be worth going for. Maybe at my next graduation ceremony.
Posted by Mike Naylor at 8:06 AM 2 comments:

I lived on Spartan Street in East Lansing for a year with Dave. We lived in a tiny house more like a cabin. Living room, bedroom, bathroom, kitchen. Our two mattresses took up the entire floor of the bedroom, piles of clothing and books stacked around all walls. This was the year I dropped out of school and worked a series of bad jobs until I landed steady work at the Clark gas station next to campus. Dave had a car so he drove pizza, and when we weren't working we spent a lot of time writing, reading, and doing math.

One evening alone, I read a chapter in a Martin Gardner book. It was about Dr. Matrix, a mathematical con man, and in this episode he was posing as a numerologist, pointing all kinds of number coincidences. Gardner's point in this story is that number coincidences are quite ubiquitous, and upon finishing the chapter I began to think if there were numbers of significance in my life.

I had a puzzle book of my father's and I knew it had the street address the house we lived in when I was born. I dug it up, and was thrilled to see 5739 Hollister Lane. A backwards 375.

Very satisfied, I turned to the next chapter. This chapter was on a mnemonic system to memorize numbers. The key was to map digits to consonant sounds, like 1 = T or D, 2 =N, 3=M, 4=R, etc.) and fill in the vowels at will to make words. 141592 can be TRee, TaiL, PaN. Next, link the images together, maybe like this: The Tree had Tails hanging from it, the Tails fall off the tree into a frying pan, etc. A very long string of images can be together to make a bizarre story that is fairly easy to remember. (I would later use this system to memorize far too many digits of pi, but that's another story). Sometimes, if you're lucky, a phone number can a phrase, like "TaSTe heR awFuL MeaTLoaF".

Likewise, words can be turned into numbers, so "NuMBeR" become 2394, for example.

I decided to learn the system, and so the very first word I chose to try out the system was my first name, "Michael." Pulling out the phonetic consonant sounds yields MKL, a 3-digit number. A weird feeling came over me as I looked up the letters on the chart in the book and wrote down each corresponding digit. It turns out that "Michael" = 375... !

To find this connection just moments after tracking down other 375s in my life was a little bit surreal, a moment I won't forget.
Posted by Mike Naylor at 4:12 PM No comments:

In January 2008 I started using this signature. It has 180° rotational symmetry, so it reads the same upside down as rightside up.

It's the third time in my life that I've changed signatures, and there are always some hassles involved (when I was 25 I changed signatures and someone thought I was writing a stolen check). I'd already been using it for a year, signing books with this signature, so I finally just bit the bullet and starting signing everything with it. The first official document was a credit card and the first purchase was for a sudoku book at Værnes airpot in Stjørdal, Norway. In January of this year, the signature went on my driver's license, and all that's left now of my old signature is what's on my passport.
Posted by Mike Naylor at 4:05 PM 1 comment: